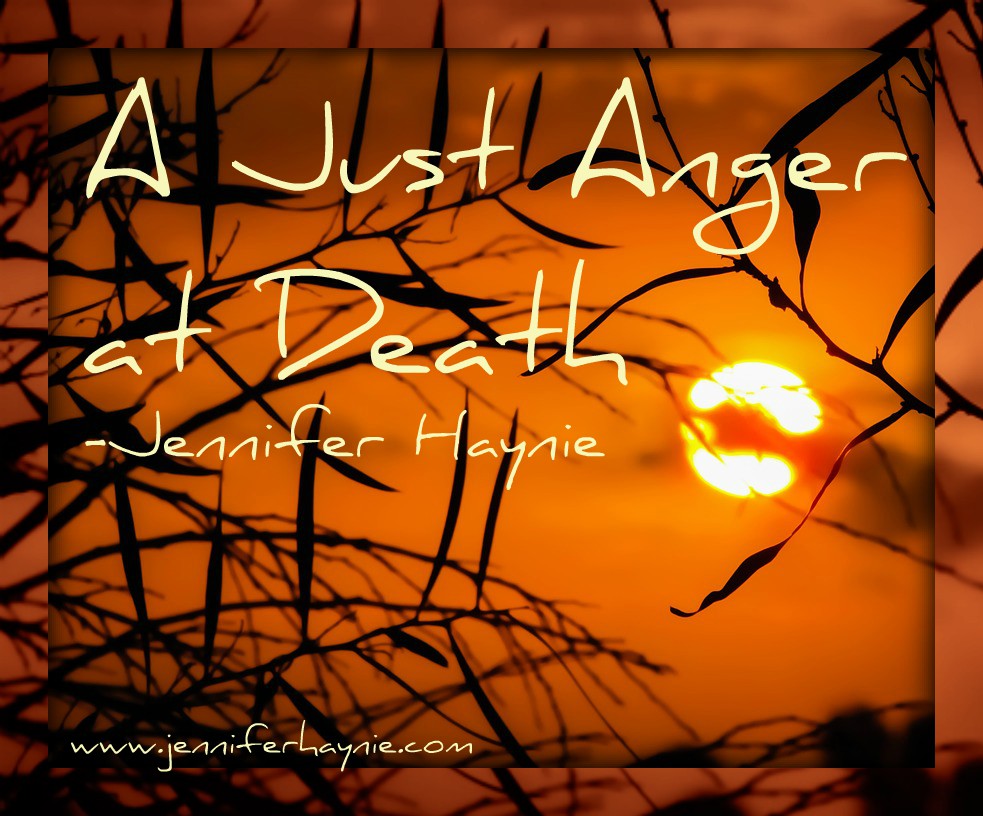 Her townhouse had three levels, with a garage and den on the lowest level, the living area on the second level, and the bedrooms on the top level. As I approached it, I remembered all of the memories generated there. You see, I met my husband Steve through my cousin. I stayed at her place when Steve and I dated. I always visited with her when I was in the area for business.

When I reached the living area on the second floor, an emotion I hadn’t expected swooped over me.

The anger came from not seeing my cousin there with the rest of our family as we talked and shared drinks.

I was angry at death and all that it stole from us when we lost her.

As I returned home and the days passed, I thought about that some more. Why had it made me angry? I think it’s because death doesn’t fit God’s plan for His creation. It wasn’t the way God had intended things to play out.

When God made creation, it was perfect, no sin to be had anywhere. No death either. Of course, that quickly changed. When sin entered the world, so did death. We’ve grown to accept it as part of life. We see it in the passing of a beloved pet or someone we care about, be it family or friends. We even see it in the fall colors as trees cease growing for the year and drop their leaves as an annual reminder of the cycle of life.

Sometimes, we can brush it off and say it’s a natural part of life.

But deep down? Personally, I can’t. I know God never desired for any of His creation to die. And it angers me.

It’s a just anger, in my mind, one that rails against something that feels unnatural. I shouldn’t have to say goodbye to those I love.

I’ve felt that anger again three times over the past few years, twice when we had to put our two beloved dogs down, then again, a couple of weeks ago when my friend passed after a valiant battle against cancer.

Though I’m no longer a stranger to death, it still feels unnatural, and I’ll get that feeling of just anger. I also pray that I’ll never let it feel natural, that I’ll remember that Jesus, in His death and resurrection, defeated death. And when He returns, death will not exist anymore.

Though we see death as a natural process, God never intended for it to be a part of His creation. #authenticity #encouragement Click To Tweet

Question: What life experience evokes a just (not unjust) anger in you?

2 thoughts on “A Just Anger at Death”