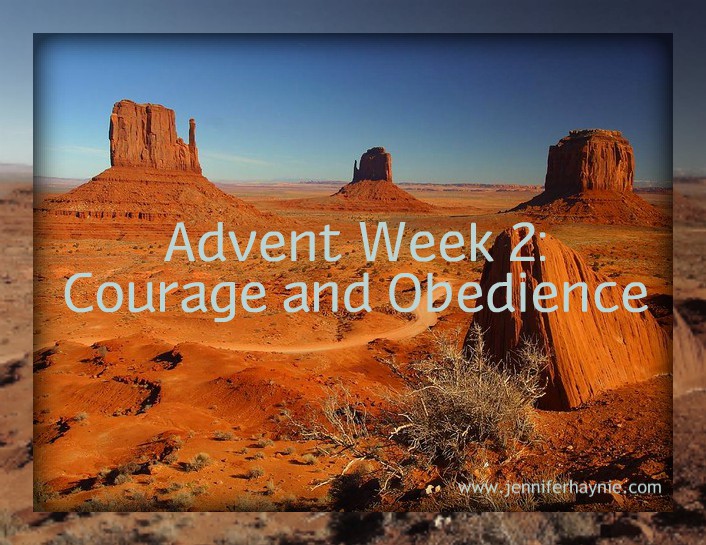 "Because Joseph her husband was faithful to the law, and yet did not want to expose her to public disgrace, he had in mind to divorce her quietly. But after he had considered this, an angel of the Lord appeared to him in a dream..."

Greg* and I had been dating for two years. We got along well for the most part. Talk of marriage had entered the picture. We were good for each other. Except for a couple of things. He got an idea into his head, and he wouldn’t budge. Period. Then came what I call the Coke incident. I accidentally spilled a couple of drops in his car, and he got very upset with me. That’s when I began praying. God spoke to me one night as I read Scripture and prayed about my future with Greg. I knew what I had to do. Break up with him. At the time, I hated it.

Obedience takes courage. Let’s take a look at Joseph, Mary’s husband and the earthly father of Jesus. He’s always intrigued me. What was he like? Probably older than Mary, who was a young teenager. He’d probably already established himself as a carpenter in Nazareth and a man of good repute. As someone who was most likely in his twenties at least, he looked forward to his upcoming wedding with Mary. Then came the news.

What went through his mind when Mary told him she was pregnant by the Holy Spirit? Maybe disbelief. A little bit of anger. And worry. The village would turn on them. Yet Joseph was a kind man. He’d quietly break things off rather than humiliate Mary and potentially endanger her life. That took courage.

Then he dreamed. That’s when he got the rest of the story from an angel of the Lord. The message was simple. Marry her. Name the Son she carried, conceived by the Holy Spirit, Jesus. And he did. He obeyed and became the earthly father to the King. That took even more courage.

Fast forward a couple of years. Joseph and Mary have become husband and wife and parents to Jesus. For some reason, they stayed in Bethlehem. Most likely, Joseph had begun a new carpentry business to support them. Then came three men obviously not from Bethlehem. They showed up bearing treasures Mary and Joseph could not imagine. Gold. Frankincense. Myrrh. For poor, young peasants with a toddler, this most likely almost blew their minds. I wonder how hard it was to get to sleep that night.

Then came another dream, another message from an angel of the Lord. Leave. Now. Don’t look back. Herod is coming for your child. Go. Don’t wait until dawn. Think about what flew through Joseph's mind, the terror he probably felt. By dawn, the house was empty, its occupants on the road to Egypt. Joseph’s obedience saved the lives of Jesus and Mary.

Finally, Herod died. We don’t know how old Jesus was at that point. And again, Joseph received a message from an angel in a dream. Return to the land of Israel. Once more, he packed up the family household for the trip to Judah.

Then came more news, once more in a dream. Herod’s son now reigned. Potential danger lay in returning to Bethlehem. Joseph knew what he had to do. They headed to his and Mary’s hometown, Nazareth, in Galilee. Again, his obedience probably saved Jesus’s life.

Courage and obedience. Two qualities I admire the most in Joseph. Obeying when God speaks into our lives takes great courage. Doing so can lead us away from danger or situations that can cost us dearly. Joseph’s courage and obedience enabled Jesus to grow and thrive outside of the spotlight of Jerusalem.

I often wonder what happened to Joseph. Beyond the Christmas story, not much is known about him. Most likely, he worked quietly as a carpenter at his reopened shop in Nazareth. The last we hear about him—and it’s indirect—is when Jesus stays behind after Passover and hangs out at the temple. Then… nothing. I can only assume Joseph passed away sometime between when Jesus was twelve and when He began His ministry.

Back to the present.  I did break up with Greg. It hurt the both of us. And yes, I wondered what God had in store for me because for the next three years, I didn’t date. In some respects, I thought I’d missed my opportunity. But God is good. He showed me contentment on my own. I grew in my faith. Three and a half years after the breakup, Steve, my husband, entered my life. Nineteen years later, I’m thankful I had the courage to obey God.

*Name has been changed.

Question: What situation required courage for you to obey God and/or your intuition?