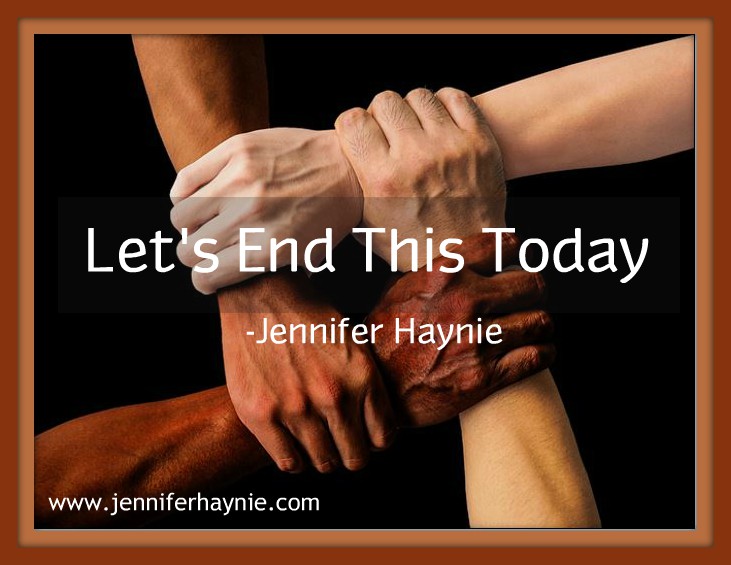 I struggled with writing this blog post. Truly, I did. Normally, I can at least start a post, complete it in a couple of drafts, and send it on its way. Not with this one. This one has required at least four rewrites because I’m touching on a topic that is literally a hot button in this country right now.

If you want to stop right now, change your web page, and delete me from your system, that’s fine and your prerogative.

But after the last couple of weeks, after hearing about George Floyd, an African-American, dying because of a white officer’s knee placed on his neck for way too long, after seeing cities suffer under rioting and looting, and after hearing the outrage and knowing that once more race relations have flared, I felt I had to speak up.

Why now? Because all of us, no matter our race, be it African-American, Asian-American, Native American, or white, are created equal and are image-bearers of God.

As our pastor mentioned this morning, racial tensions have been around since the founding of our country. Great strides were made during the Civil Rights movement of the 1960s, but by no means did it achieve total equality.

Ever since those tumultuous years over fifty years ago, racial tensions have flared, then gotten swept under the rug, then flared again. In the past ten years, we’ve had tensions break into riots, and last weekend was no exception.

Last weekend also touched close to home when my adopted hometown of Raleigh experienced rioting like no one has ever seen before.

Jesus has called us to love our neighbors as ourselves. We’ve failed in that regard on all sides, from allowing systemic racism to remain in our society to rioters destroying businesses (even minority businesses) in mindless rage.

This cycle has got to stop.

“If you bite and devour each other, watch out or you will be destroyed by each other” (Galatians 5:15 NIV).

Paul says it so well in this verse. As long as we tear each other apart in word and deed, we run the very real risk of destroying this country from the inside out.

Let’s try something else, something that I’ve noticed has been quietly occurring but receives no press because it’s not as headline-grabbing as a fire or people throwing rocks.

Let’s talk to each other—and listen, not just hear people with our responses already laid out in our mind.

Honest conversation is hard. It requires a laying aside of a lot of things like preconceived notions, pride, and pre-prepared responses. It requires empathetic listening, which takes a ton of work and is humbling—on both sides of the equation. But the result is worth it.

Recently, I saw a picture dated June 1 on the Facebook page of a friend. That seems like a long time ago, but it was only six days. It’s of a sign held by an African-American woman. The sign reads, “Not all Blacks are criminals. Not all Whites are racists. Not all cops are bad. Ignorance comes in all colors.”

Let’s remember that. We are image-bearers of God. We are equal in His eyes.

We need to end systemic racism and realize that to fight ignorance, willful or not, we need to talk with each other.

Only by dialoguing together about this issue can we truly come together and say, “This stops today. With us.”

We need to end systemic racism and realize that to fight ignorance, willful or not, we need have good, honestly humble dialogue. Let’s start that today. #AllLivesMatter #Authenticity #Encouragement Click To Tweet

Question: What are topics that need some good, honest dialogue regarding race relations?

4 thoughts on “Let’s End This Today”