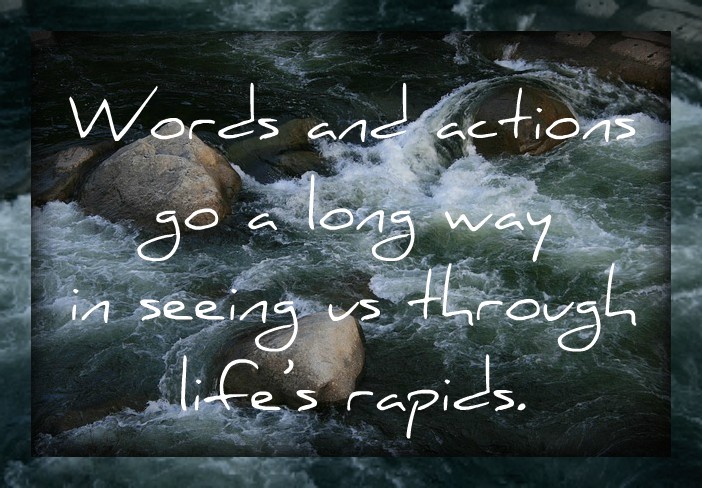 Have you ever had one of those years? Like when things just seemed to fall apart before your very eyes?

First came an old, scarred-over injury that took me down. A visit to a physical therapist revealed the news. No exercise beyond walking until he finished working away the scar tissue. I depended on exercise to keep my sanity.

A family tragedy happened that shocked everyone.

Then came walking with a family at church as they sat through a trial for the young people who’d murdered their son.

I felt as if I struggled to keep my head afloat in rapids where one wrong move or one more thing would send me under.

When life’s rapids happen, where do we turn?

If we follow Jesus, our answer should be simple. Turn to God. Easy in theory but hard in practice. Today as I was preparing this blog, I took a look at one of my favorite stories in the Bible. It happens in John 11:1-44.

Martha, who I discussed in last week’s post, and her sister Mary have a brother, Lazarus. He falls ill and dies. Word gets out to Jesus, but He delays His arrival. When He’s still a bit off, Martha rushes out to Him. She grieved the loss of her brother, yet she had the presence of mind to make a statement of faith that stuns me. “But I know that even now God will give you whatever you ask” (John 11:22, NIV). To which Jesus made a promise. “Your brother will rise again” (John 11:23b, NIV). And Lazarus did.

If we don’t follow Jesus, where to turn become more complicated. Do we self-medicate, hoping in some way that will take away the pain? Do we become bitter? Disillusioned? Or do we finally admit that some things are beyond our strengths and abilities?

How can we push through life’s rapids?

One thing, regardless of faith, that we can do is lean into each other. We’re made for community, made to support one another. Sometimes, when life throws us into that river and we struggle to keep our heads above water, we yearn for someone to throw us a life raft.

That can come from many places in both word and deed.

How can words push us through life’s rapids?

Words have power. We writers believe that. Everyone needs to believe it. The most powerful? Those chosen with care to build up. When we’re in the middle of the rapids, we want encouragement, not meaningless platitudes.

Words can come from the strangest of places. A coworker. Someone at church. Even a stranger on the street who might have noticed something in our faces.

How can actions push us through life’s rapids?

Sometimes, words offer no solace. Instead, actions can suffice.

Hugs are great. So is a kind smile and a squeeze on the arm.

Even better, an unexpected action. Maybe someone has an ill relative and hasn’t made it to the grocery store in ages. A friend shops for them. Or if someone’s just had surgery and can’t get out of the house to do anything. A friend does yardwork.

Words and actions go a long way in seeing us through those rapids until suddenly, we find ourselves in still, quiet waters.

As for my 2010, I got through those crazy rapids. I began exercising again in December. Joy crept into the edges of sorrow for my family. Things settled down at work. The murderers of our church members' son went to prison for a very long time.

More than ever, I learned two things. God’s strength is so much stronger with my own. Through His hands and feet, also known as fellow believers and other, unspoken angels, I got through those rapids and into a 2011 filled with much more peace than anything else.

Question: When was a time when words or actions pulled you through a hard time?