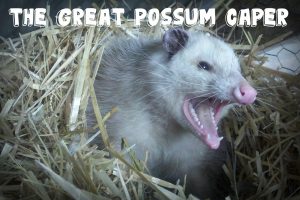 The shouts startled me.

Oh, no. I realized our Basenji girl, Bonnie, must have caught some sort of hapless small creature who’d been foolish enough to venture into our backyard. Steve must have been trying to stop her.

I rushed outside with Clyde, our male Basenji who’s almost six months old, hot on my heels.

Steve had Bonnie in a death grip and stared at the grill. Then Clyde had to get involved. He bounced around the grill as if whatever was underneath was a playmate.

“I think there’s a snake under the grill,” Steve said as Bonnie squirmed in his arms. She wanted a taste of snake (for the record, Steve says it tastes like chicken).

A snake? No surprise that exceptionally hot July night when it was still close to ninety degrees, even after the sun had set. I grabbed Clyde. We got both dogs inside and slammed the main door so they couldn’t blast through the dog door and back into trouble.

“I’m getting a headlamp, and I’m going back out there,” Steve announced as if he prepared for an adventure from which he might not return.

“Take a hoe if you need it.” I settled on the couch, but worry gnawed at me as surely as Clyde now chewed on his bone. We weren’t immune to snakes in our area and venomous ones at that. Matter of fact, just a few years ago, our former neighbors had found no less than three copperheads under their deck. Thanks to it being so hot and dry, it wouldn’t have surprised me a bit if one had decided to take cover in the coolness under our deck.

Minutes ticked by. Then banging erupted.

“Get! Get! Get out of here!” Steve’s shouts raised my concerns again.

A few minutes later, he stepped inside. “It’s okay for the pups to go back outside.”

I chuckled, more from relief than anything else.

Another possum caper to go with the one we had when we first moved in. That time, they’d built a possum nest under our house.

Peace once more reigned. The possum escaped certain demise, and the canines came away with no scratches at all. A win-win for both species. And who knows? Maybe we'll get another great possum caper before the summer's out.

2 thoughts on “The Great Possum Caper”