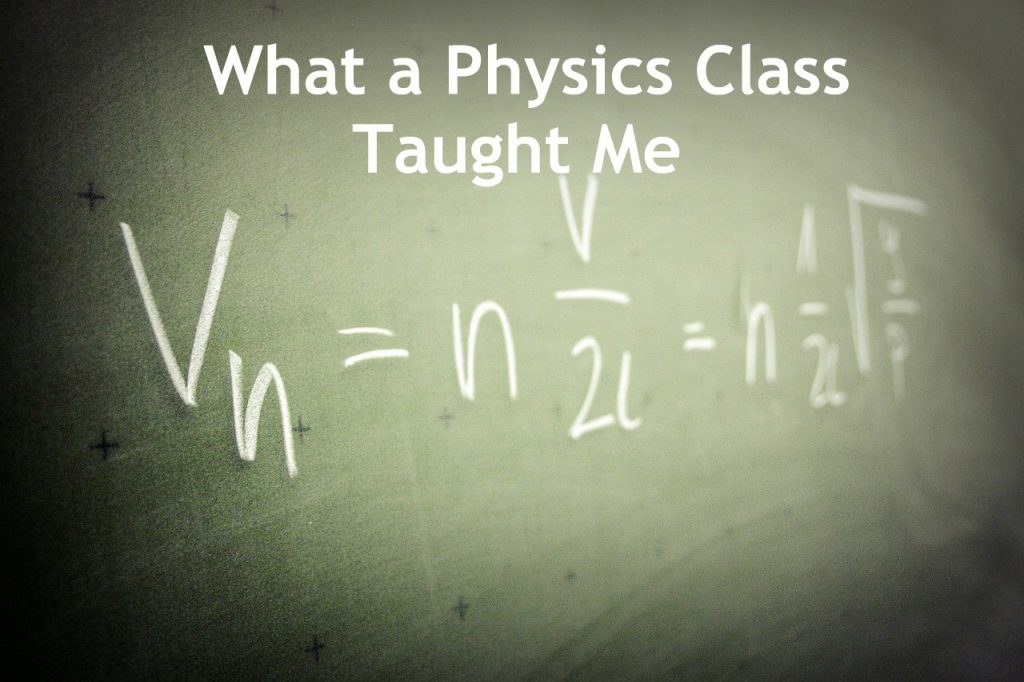 Spring semester, senior year.  As a physics major, I needed one more physics course, intermediate lab, to graduate.  I knew my favorite professor taught it, and I knew it would be a great semester because of him.  More so than Dr. Meyer*.  When I’d taken a class then named Mathematics for Scientists, Dr. Meyer had taught it.  Everyone, including the guy who would be valedictorian of the class behind me, had done miserably.  Hindsight tells me that Dr. Meyer, in teaching that course for the first time, had made it way too hard.  But back then, my experience taught me one thing.  Avoid anything taught by Dr. Meyer.

I got my syllabus.  My eyes widened as I stared.  Dr. Meyer would be the professor.  My first thought?  I’m so going to fail.  There were five of us.  The future valedictorian.  Two guys, and my friend, Katrina.  We would work together across the semester on four experiments and partner up, switching off so that each person partnered with the other for an experiment.

I had no choice.  I put my head down, and I began bulling through each experiment, all the time living in fear that I’d fail, thus being stuck in college for another year.  My fear had grown to gargantuan proportions.

It’s hard when that happens.  It’s hard to have a boss who seems difficult to please.  Or a teacher.  Or a parent.  When faced with those circumstances, we have two options.  We can withdraw, cop an attitude and stop caring, and barely scrape by (or, heaven forbid, quit).  Or, we can give our best, even under what may be lousy circumstances.  The decision is ours, and the way that we respond has the potential to impact the way we react in similar situations in the future.

Another thing I learned is that fear can be a great influencer.  I took one look at the syllabus and immediately got overwhelmed, especially when adding in the other courses I was taking to wrap up my college career.  I recalled some very wise advice offered by my advisor.  Break it down day by day and focus on that task for that day.  Such great wisdom and what probably saved my sanity.

Finally, my last experiment arrived.  Katrina and I were paired with each other.  Our time together, including in the computer lab of the physics building’s attic at two in the morning, bonded us so closely that we’re still friends today.  We got everything set, made the poster, and ensured before we left that the laser to demonstrate Fourier transforms was ready.

Class time arrived.  Our turn came.  Dr. Meyer approached our poster and asked us to explain things.  We did.  We turned on the laser.  Things worked great, and it was once more amazing to see the way math became the language for science.  Dr. Meyer only smiled and moved on to the next group.

Then an amazing thing happened.  “Let’s go for a beer,” the professor who I’d feared said to the group.  We all wound up in the warm, breezy afternoon at a nearby restaurant.  Then, he looked at us and said the five most amazing words I’d ever heard and with a gentle smile.  “You can call me Frederic.”

Wow.  The man whom I’d feared gave me the grade I probably treasure most from my time in college—an A.  I grew to respect him even more than I ever had.  I also began seeing him as more than a professor to be feared.  I saw him as a man with a big heart.

*Name has been changed to protect the innocent.

Question: When was an experience where you were so convinced you would fail yet did well?