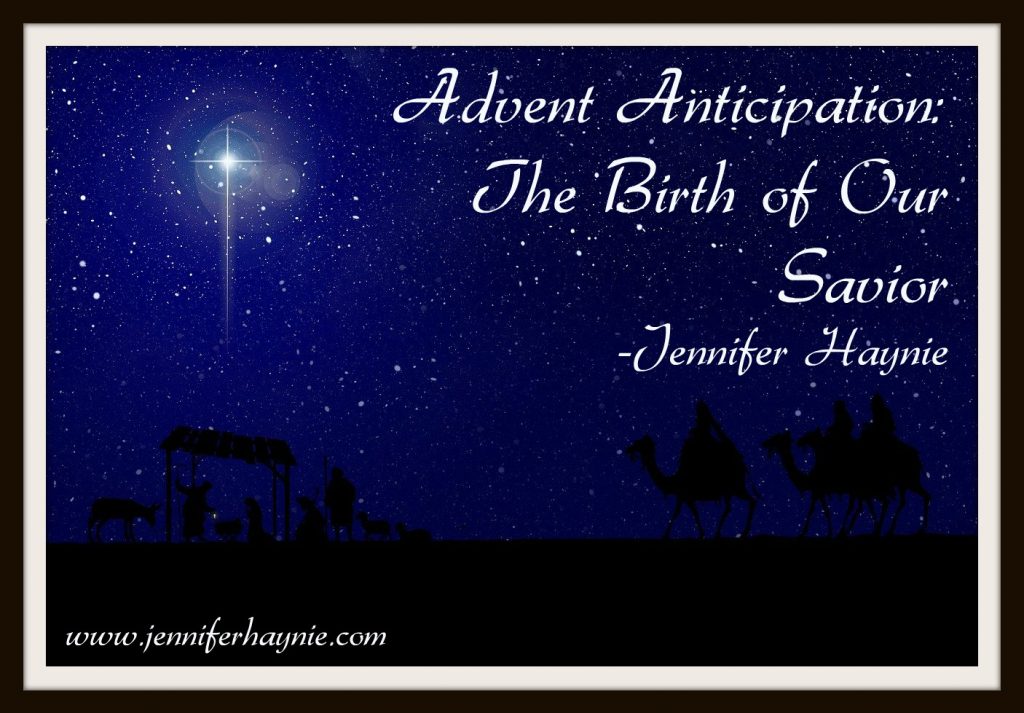 As I’ve written these past three weeks, we anticipate in two different ways: looking back to plan for tomorrow and looking ahead. This week is once more looking back to look ahead. For those who trust Jesus as their Lord and Savior, this will make sense to you. To those who don’t, this may not make sense, but I challenge you to keep reading.

God made the world. He’s the creator God. And when He made the world, it was good—until sin entered the picture. With it came death, not just of His creation, but of his image-bearers, us. Most likely within minutes of sin entering the world, God gave the first prophecy in Genesis 3: “I will put enmity between you and the woman, and between your offspring and hers; he will crush your head, and you will strike his heel.” (Genesis 3:15 NIV).

Not that it happened right away. Not by a long stretch. Centuries passed. God called out a people, the Hebrews. They certainly had their ups and downs, from slavery to wilderness wandering to becoming a nation to dividing and then falling into idolatry. That idolatry led to their destruction and a 70-year exile. All because they failed to keep the law and follow only God.

They returned from exile and eventually found themselves under the oppressive rule of the Roman Empire. The Hebrews looked for a military Messiah, one who would come into Jerusalem riding on a stallion to lead them to total freedom.

They looked hard for their their Messiah, so hard that they missed the small way that Jesus came into the world—as a babe born to a woman in a way that many of that era would have considered to be in a scandalous situation. He came quietly and grew up in obscure surroundings. Over thirty years later, he did ride into Jerusalem, but on a donkey and not a stallion, and only to be ridiculed and executed on a cross, the ultimate, shameful style of Roman execution.

And to what end? To take our sins upon us and conquer death. Only then did He return to heaven.

And guess what? He’s coming back.

During our observance of the third week of Advent, our pastor posited something I’d never considered about the hymn “Joy to the World.” Could it really be talking about the second coming of Christ? I thought about the lyrics. Quite possibly, especially the last stanza.

Jesus is coming back. Count on it. And in Scripture, there’s a challenge. Romans 14:11 (NIV) lays it out very clearly: “‘As surely as I live,’ says the Lord, ‘every knee will bow before me; every tongue will acknowledge God.’”

This isn’t optional. The there’s no “if we choose” in Scripture. The NIV says “every knee will”. Other versions utilize the word “shall”, which any lawyer will say is very strong language, a command, not a recommendation, not a suggestion.

The question remains, do we do so now, by seeing Jesus, though quiet His birth was, as our Lord and Savior, or do we do it unwillingly, as we stand before Him in judgment?

Some people may call that a very judgmental question.

All I’m stating is that we have a choice. Let God into our hearts and let Him stir us now, or be forced into submission before the judgment seat of God? We all have that choice to make. Christ’s birth has made us stand in anticipation of His second coming.

God has a plan for the salvation for all of His image-bearers, His created. That baby, so quietly born, is coming back. Let’s anticipate His return and be ready.

Christ came in a quiet birth. He died and a cross and rose again. And He’s coming back. #Advent #authenticity #encouragement Click To Tweet

Question: How will you observe Christ’s birth this week?