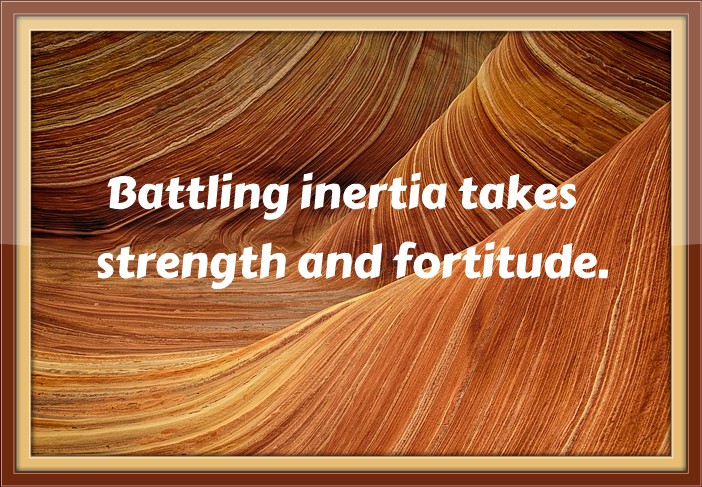 The weeks had worn me out. Family issues. A very heavy workload. Too much travel for work. I found myself physically, emotionally, and mentally exhausted. And with that came the very thing I can’t stand.

Maybe not in the strict definition. Since I majored in physics, I’m familiar with the term in a scientific manner. In terms of physics, it means “a property of matter by which something that is not moving remains still and something that is moving goes at the same speed and in the same direction until another thing or force affects it.”

Unfortunately, we don’t live in a strictly scientific world.

Meaning that inertia takes on a whole, not-so-nice definition. Or two.

(Thanks to Merriam-Webster for these three definitions.)

What I was experiencing fit those last two definitions. I wanted to work out. I wanted to eat right. I had no energy. Fortunately, this isn’t something that’s too common with me and usually happens right before I head out on vacation. This time was no exception. How would I break free of the chains of inertia?

Give myself a break. In some cases, inertia may be a way that our bodies tell us we need to slow down. These past few weeks had exhausted me with my business trip week before last putting the icing on the cake. I needed to listen to what my body was telling me. I did. I rested rather than run the risk of injury by working out when I was so tired.

Be intentional. I wrote about being intentional in a previous post. To break free of inertia means planning what to do and following through with it. While a couple of Fridays ago I felt no energy for a good workout, I planned to go the following day by packing my bag and placing it in the car. It worked.

Create a good kind of inertia. Remember that physics definition? Things keep going in the same direction unless another force alters its course. I do believe there’s a good kind of inertia out there. It comes through the formation of good habits. Back to my workout example. At the beginning of the year, I made a point to work out three to four times a week. Gradually, it became a habit, and now, if I miss a workout or few like I have lately, I truly do miss it.

It’s okay to stumble occasionally. Sometimes things happen that are out of control. When they do, it’s important to focus on getting back into that good habit before bad inertia takes over.

Offer rewards. Getting back into good inertia takes time and effort. Sometimes, lots of effort. Put something at the end of the line that will serve as a reward. Maybe it’s a delectable treat. Or a trip. Or something similar. For next year, I’m already thinking about what a good reward would be if I meet my workout goals.

As for my weariness, I’m now getting rested and enjoying a change in the schedule, if only for a short time. When I’m back into a routine, my hope is that I’ll be refreshed and ready to tackle the challenges life will throw at me.

Question: What are ways you use to break bad inertia?