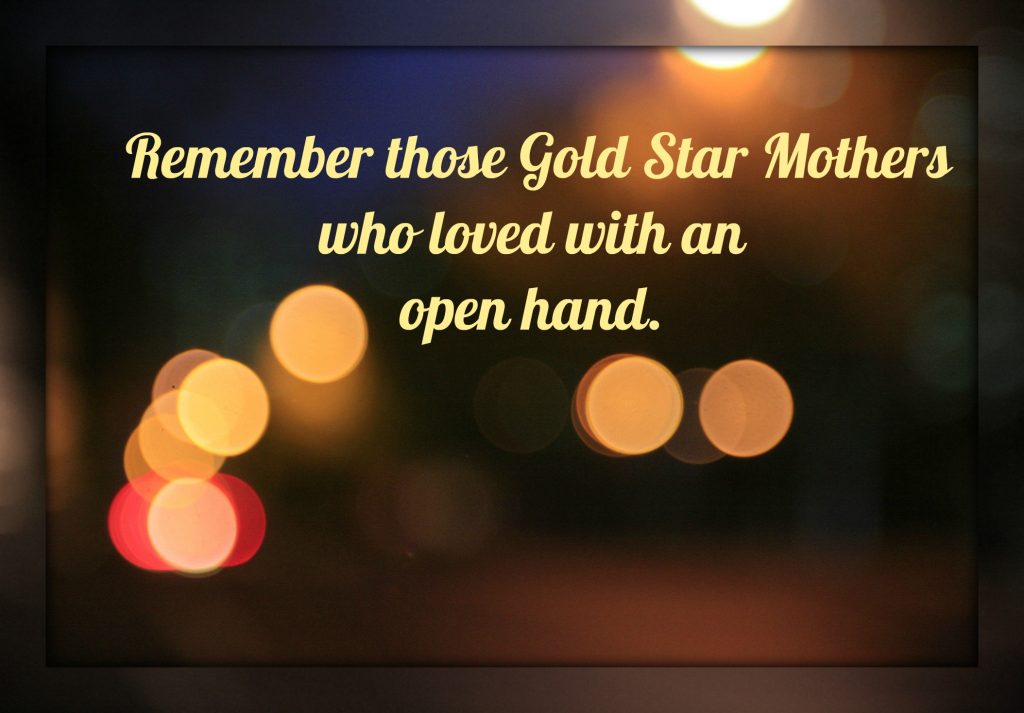 In the United States, when someone serves in our Armed Forces, be it in the Army, Navy, Marine Corps, Air Force, or Coast Guard, they do so voluntarily. People serve for different reasons. Funding for college, escaping a dead-end life, following in the footsteps of parents, and above all, patriotism. When someone enlists or becomes an officer, most likely, they never expect to die in service to their country.

On Memorial Day, we stop to remember them, or, if not, we should.

There’s a group of women who do remember, the Gold Star Mothers. These women belong to a sorority no mom ever wants to belong to.

They have lost a son or daughter to war.

Think about it for a moment. Members of our Armed Forces are all voluntary. That means that their mothers, these true, strong, brave women, love with an open hand. They let their sons and daughters go to serve our country.

I imagined they never expected for their children not to come home.

What is a Gold Star Mother?

I did a little research on the organization. What I found is surprising. They’ve been around for almost a hundred years in an official capacity. Unofficially, they’ve been around for over 100 years. It all started in 100 years when a mother saw her pilot son off to war. His letters home ceased, yet she kept praying—hoping as well—that he would come home. He never did, and eventually, his wife received his personal effects.

It took ten years, but his mother organized a group of women who had also lost their sons to the war. The Gold Star name comes from the gold star that hung in windows of those who mourned the passing of that son.

Nowadays, the organization continues to honor those women who have lost children who have served.

What can we do for Gold Star Mothers?

If you know one, hug them close today. The loss is still real, still raw in many cases. They need to know you love them and care about them.

Remember them. Memorial Day is a solemn day, but it’s only one day of the year. Remember them in your thoughts, your prayers, every day, not just today.

Love them. If you know a Gold Star Mother, love on them. Cry with them. Treasure their memories of their children. Serve them. Simply be with them.

Most of all, remember them. Remember those Gold Star Mothers who loved with an open hand.

Question: Do you know a Gold Star Mother? If so, how have you helped them remember their son or daughter?